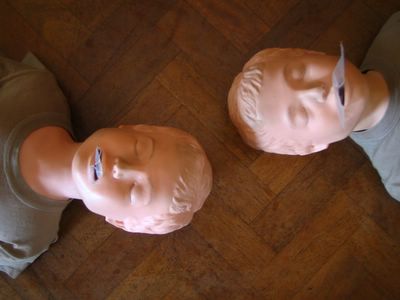 A B C, Airway, Breathing, Christ, what was the third one again, oh shit, Alfie's just died. I really hope that none of the children in my class drown this year. We always get given this scary lecture in resus in the summer term, because the swimming pool comes back into use in the summer term.

The lecture is nasty in two ways. Firstly the instructor keeps saying things like "nothing to worry about," "same as last year basically," and then he talks through how to save someone's life really, really fast, as if he has to get to the pub. Then we put each other in the recovery position.

Those of us of a four eyed persuasion always make the same funny joke about not being able to see when we come around without our glasses on, as we have been warned to re-assure the person we are nursing that they have had their glasses removed. Apparently it can be traumatic to wake up blind.

After this we have to breathe into a plastic child's mouth and pretend that the child has vomited and shows no signs of circulation.

The second reason why this scares me is that if a child in my care did die, I would be held responsible and the council could wash their hands of me, having now fulfilled their responsibilities by providing adequate training.

A man came to our door tonight. He smelled a bit like he had been drinking strong alcohol. He had some bags and said he was waiting for a bus, but none was coming, could I call a taxi for him. I said "Sure," and called Panther Taxis on 715715. When I went out to tell him that a taxi was coming he started going on about 20 quid, luggage, 10 quid, a mate and a court restraining order.

10 minutes later there was a ding dong. It was the taxi driver. His customer had vanished though. Fair play to him he took it all very well, and shrugged it off quite happily, so now I will use Panther Taxis all the time and advertise them too. That's Panther Taxis.

But who was this man? Why did he run away? He really had two big bags. I enjoyed shitting Polly up by imagining aloud the smashing of the window or him jumping around a corner at us, and I pretended to think he was a child murderer. This was a bit of a stupid thing to do though, because Polly then told me she wanted me to check to see if he was lurking in the side entrance. This really shit me up too, and I ended up creeping around the outside of the house with a screwdriver in my hand. I'd just put up Mick's cot, so my weapon was to hand. I thought my assailant would be so terrified of me tightening them up that he'd flee. There was no-one there. I think he just caught the bus.