Mick is standing about 4 inches away from the telly and is using two hands to excavate his arsecrack. He’s quite bored. He’s watched TV since nine this morning. It’s now ten to five.

Mick is sick. He has a temperature of 38 degrees. He spent last night in bed with me, heavy breathing through his nose like a peveret, hitting me and saying "I want to drink water please," every half an hour from eleven o’ clock last night until half past six this morning.

From half six until to half eight he added whispering the lyrics to "Ride a Cock Horse" and "Twinkle Twinkle Little Star" to his repertoire. I said "If you don't stop talking Mick, you'll go in your own bed," sixty three times.

I wonder at which point he thought "Right mate, you say you'll put me in my own bed, but so far you've said that to me eleven times and not actually managed to lift your head off your pilllow. I reckon that's a pretty empty threat, now would you stop interrupting me, I'm trying to remember the words from the Iggle Piggle song to whisper in order to interrupt your sleep. You mug,"

Whilst I didn't get any sleep I enjoyed the experience because it made me feel like that man in the Athena poster from the 1986 called Man and Boy.

I always loved that poster and tried to get loads of girls pregnant in 1986 in order to recreate it, but sadly it never happened for me. This was mainly because my seduction technique consisted of stealing £2.99 from my Mum’s purse and buying the picture disc of either “West End Girls” by the Pet Shop Boys, “Don’t Leave Me This Way” by the Communards or “The Edge of Heaven” by Wham, then giving it to Vanessa King or Kimberley Myers or Sarah Bayliss at lunchtime before inviting them to come with me to watch Luke Gale do “flobbing” into the biology pond. 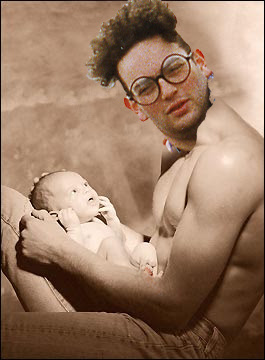