If you’re reading this, I hope it doesn’t make you get old school.

I am standing in Borders.

Mick is shouting “GO UPSTAIRS, I WANT YOU TO BUY ME A BOOK,” only he is doing it in his new psycho voice where he screams so loudly that he has three separate voices, one from his stomach, one from his throat and one through his nose. People are looking and not smiling.

I’ve been looking for twenty minutes which could be something to do with Mick’s explosive behaviour.

I am holding a calendar called “” and seriously considering it because it has a nice picture of a Sunflower on it. Something inside me says “Definitely not cool,” so I head for the Beatles calendar, which is a much cooler calendar. The coolest of all calendars.

What kind of guy am I? The kind of guy who has a really cool calendar. How cool is that? Well, we’ve got the Beatles, who are cool, and then on top of that we’ve got efficient time management, the coolest thing ever, so add them together and you get me - double cool.

Last time I went Calendar shopping I got the Cheeky Girls calendar which Polly threw in the bin. Mick has stopped screaming and is just sobbing mournfully now so I head over to the lift to take him to the kids section when I see the Cliff Richard calendar. 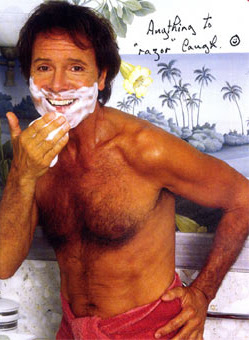 It IS perfect. Then I look at the size allocated for writing on it. TOO SMALL. I am gutted. These days I can’t afford to do a joke for half of £7.99. A little part of me dies. How many more little parts of me can die before old me is dead? And will I notice when the last part of old me does die? And is it a sadness or a relief?

He looks at me and nods his head sagely. “Go home Daddy. On the bus,” he says.

I pay for the cool Beatles calendar and push Mick to the bus stop.

As we wait for the bus I wonder what the next explosive tantrum will be, and at what point it stops being “He’s three years old,” and starts being

“Thanks for coming to see us about Mick today Mister Trent, please take seat.

Mr Trent, Have you ever heard of something called the Autistic Spectrum?

Mr Trent, Here’s a leaflet that explains it to you. in an easy to understand cartoon.

As you can see Mr Trent, he is crying his eyes out and saying "My trains must all be standing up before you switch off the light,"

As you can also see Mr Trent he has 327 trains.

As you can also see Mr Trent they all have stickers with their names on them.

As you can also see Mr Trent, his father is slamming the door of the room and shouting at his wife that "WE'VE GOT TO PUT OUR FOOT DOWN AT SOME POINT.

As you can also see Mr Trent, his mother is crying." Possible flashpoints whilst waiting for the bus include:

A bus arrives – This, apparently, is a perfectly good reason to act as if every human right has been forcibly removed from you. It doesn’t matter what sort of bus. If it is a double decker then it should have been a single decker and vice versa. If it arrives quickly it’s too fast. If it’s late it’s too slow. Why are we going on a bus anyway? I want to go on a train…

A blue bus arrives to take us home, not a red bus - This is a particularly cunning flashpoint as no red buses go anywhere near our house.

At the train station four “Youth” get on. I hear footsteps and then a female voice shouts “SAMMY, MIA, MIA, MIA,”

“WHERE ARE YA?” shouts “Sammy”

“MIA,” shouts the woman whose name isn’t Mia. She is saying “I am here,”

I am really terrified by their loutish and loud behaviour. I don’t experience this as fear though, I experience it as prejudice and hatred.

“HAHAHAHAHA” they all laugh.

They are harmless and I think to myself “How nice, they are actually all really pleased to see each other and just having really really loud chat. Maybe it’s good that these uneducated youth are going to grow up to rule the country, it means that maybe people will start communicating with each other without embarrasment and hushed voices. Good for you youth. Maybe I’ll turn around and give you a validatory smile. Oh, you’re saying “Fuck” quite a lot - maybe I’ll just try to appreciate you quietly and hope none of you notice that I am on the bus.”

One of their mobile phones goes off. Except it’s not going off. It’s just playing a song. Dizzee Rascal is repeatedly requesting that I don’t make him get old school. He is doing this over an old school hip hop beat therefore making his request rather redundant.

If “Riding on a bus with your child sitting next to you, becoming increasingly embittered by a twunt playing my song out of a mobile phone,” is on the list then may I wholeheartedly express my apologies, but I’m afraid you will have to get old school.

The twunt only has a 30 second attention span, as the music then changes to somebody getting very excited about me watching him “crank it like a hoe”. I don’t like gardening at the best of times. This is utterly preposterous.

I don’t know what to do. I want to tell them to turn the phone off. I’ve been brave twice before in the face of anti social behaviour. The first time ended up with my suspicion that I may be a fat man who resembles a woman’s reproductive organs being repeatedly confirmed by 14 youth who then waited for me to leave the cinema until the police turned up to escort me to my car, and the second time led to this. I decide not to turn around and say “I’m sorry, I think your phone is ringing, perhaps you should answer it?” Instead I make an effort to appear as if I am wholly focused on Mick who is demanding a move of seats.

When the bus stops we move across to the seats on the left hand aisle. As we move across I bravely glance at the youth for about two fifths of a second. They look a bit older than I remembered. I sit next to Mick.

“Sorry Mick,” I say, very calmly, staring straight ahead, “I have to sit next to you or you’ll hit your head.”

Mick goes into full blown psycho mode for the next 10 minutes.

I worry so much about upsetting our fellow passengers that I break into a sweat.

We will increasingly spend our lives being bullied by bone headed nitwits proving their lack of manners, education and dysfunctional upbringing ('though in Mick's case - it could just be because he's not well). My partner and I have caught wot he had and are sick too.